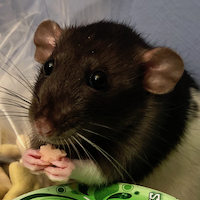 Sister to Smoak. Nyssa is a pretty, sleek, hooded dumbo ratty with a ragged stripe all the way down her back. A remarkably lively rat with three modes: running, eating and hiding. She is a curious girl who soon discovered that the inside of a t-shirt was a fun place to explore. She absolutely has to be the focus of attention, if anyone else is getting any fuss — or worse, food — then she will quickly place herself front and centre. It took quite a while for Nyssa to even understand what a name was, she recognises it now and will respond, but I’m convinced she just thinks it means “snack time”. 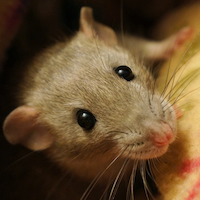 Named after Felicity Smoak in Arrow.

Sister to Nyssa. Smoak was such a beautiful grey-brown girl, a bit skittish, but utterly gorgeous. She proved herself to be the rattiest of rats: when we brought her home, she escaped onto the floor as I tried to get her from the carrier to the cage and the sight of her bounding along the skirting board under the sofa… just so incredibly ratty. She was beautiful, with the softest fur, and a little aloof, she knew her name but would choose whether to respond to it. She developed a probable brain tumour at far too young an age; we took good care of her until even banana didn’t appeal to her and we let her go. 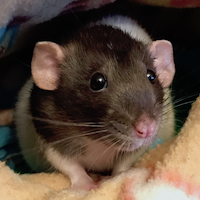 Named after Ivy, the Archive in the Dresden Files.

Sister to Molly. Ivy didn’t really fit into any of the markings categories; she had black from her nose to her shoulders and the rest of her, including her chin and throat, was white with a couple of stray spots of black. She was decidedly skittish, twitching at most noises (especially crinkly plastic) and was never keen on being held. She would happily come up for food and let you stroke her, she just didn’t want the interaction to go on for too long; she would much rather find a comfy spot to hide in. She did have a slow-growing lump, but that never caused her any problems; she just grew old and life eventually stopped being fun, so we said goodbye. 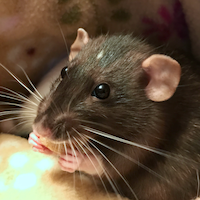 Named after Molly Carpenter in the Dresden Files.

Sister to Ivy. Molly was a wonderfully sleek mismarked black Berkshire. She had the cutest little white feet and belly and a tiny dot of white on the top of her head. Luckily she grew out of her initial habit of trying to leap off in random directions, instead simply happy to just run around at full speed, including in the wheel, which she loved. She developed a lump, but completely ignored it for far longer than you would have thought possible — she only stopped climbing in the cage when I removed the shelves — but eventually, the risk of ulceration became too great and we had to let her go. 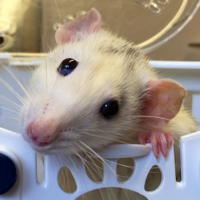 Named after the confidante and apprentice of Kevin Flynn in TRON: Legacy.

Sister to Yori. Quorra was a dumbo roan who started out with a beautiful black patch across the back of her head and neck but lost it within a couple of weeks. When she was just under six months old she got an ear infection which left her with the most adorable head tilt, but luckily no lasting balance problems; if anything she became more agile and her favourite trick was corkscrewing her way down my t-shirt. She was a tea lover and I was always happy to share my mug with her, though I drew the line when she started splashing in it. She had a tendency to be overenthusiastic about grooming the other rats, which did get her slapped down every now and again. One of our longest-lived ratties, Quorra eventually started losing weight and when she finally lost interest in her food we knew it was time to say goodbye. 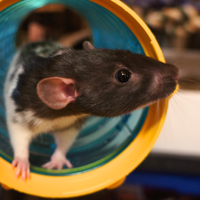 Named after Rommie from Andromeda.

Sister to Rocket. Rommie was a black-eyed, mismarked hooded downunder dumbo rat; she had a brown hood and splotches all over her back and a slightly lighter solid coloured tummy. So pretty. She had two speeds: chilling and frantic. She wasn’t scared of anyone, but had no interest in sitting still on them; she climbed, dug and generally dashed around. She loved to explore, but if she ever slipped off the sofa onto the floor she immediately panicked and tried to find a way back up. She loved her food and would eat anything put in front of her, but was very good about not chewing the furniture and cabling, unlike previous ratties. She lived a good long life, got old and started to fade; we looked after her until the time was right to let her go. 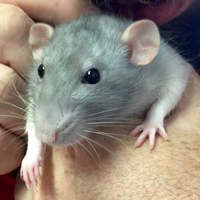 Named after the female lead in the original TRON film.

Sister to Quorra. Yori was a grey hooded dumbo. Her fur was very slightly longer than the others, so she tended to always look scruffy, no matter how much she groomed herself. She had a respiratory infection soon after we brought her home and she never grew as quickly as her sister; that, combined with her frustratingly persistent habit of hiding food rather than eating it, meant that she could always easily stand on the palm of my hand. Although small, she appeared to think she should be boss of the cage, though no-one else agreed, which led to occasional scuffles and squeaking. She was a bit of a medical puzzle — bleeding from various places with no obvious cause – but she always seemed otherwise healthy and we expected her to carry on being cute-to-people, annoying-to-rats for many more months. She died at home, far too young and with no warning. 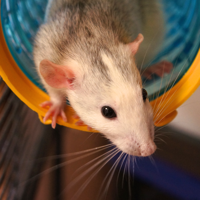 Named because of the speed she dashed around the cage when we tried to pick her up to come home with us.

Sister to Rommie. Rocket was a roan dumbo rat with dark ruby-red eyes; she had the most gorgeous grey stippling and a pretty blaze on her head when we got her, but as with all roans, she faded to a variably grey-speckled white. Rocket was the more chilled of the sisters, though she could move at speed when she had reason to. She was a little territorial and this manifested itself in (mostly) gentle nips suggesting that you should leave her alone — it was strangely endearing, especially when she started using the nipping to tell my other half that it was time to go back to the cage at the end of the evening. Her grumpy personality won our hearts. She left us at the same speed she arrived; a pituitary tumour took her coordination overnight and it was only right to let her go. 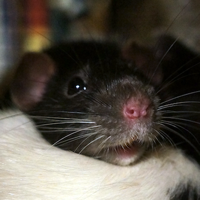 Named, with her sister, after River Song from Doctor Who.

Song was a black-eyed, chocolate-brown hooded, dumbo rat with a big spot in the middle of her back. With her sister they earned the nickname “The Demon Twins” by never staying still when being held and using their humans as a playground for climbing, running and digging. Song was the baby of the pair and the most lively, twitching at every sound. She soon learned that I was a safe place and whenever she was taken out of the cage she would immediately dive under my t-shirt — this was cute when she was tiny, but required far more fortitude when she grew to five hundred grams; especially when she did her favourite trick of locating herself out of reach right between my shoulder blades. She also had the sharpest claws. “The rat that wouldn’t give up” successfully ignored her slow-growing lump for six months before it finally became too large and we had to let her go. 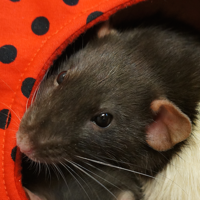 Named, with her sister, after River Song from Doctor Who.

River was a black-eyed, chocolate-brown hooded, dumbo rat with a stripe two-thirds of the way down her back from her hood. The other half of the Demon Twins, she was the more relaxed of the pair. As she grew older she claimed the back of the sofa as “her spot” from which she surveyed the room looking distinctly unimpressed. A suspected brain tumour slowed her down and robbed her of some of her coordination, but she hung on in for another two months before it came time to let her go. 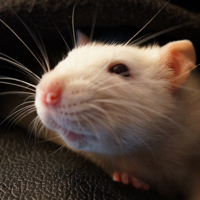 Named, with her sister, after Seven of Nine from Star Trek: Voyager

Seven was a ruby-eyed top-eared rat, white with a very variable smattering of grey. She was always smaller than her sister, Nine, and also more energetic. She was the sweetest rat and also the derpiest, and she had the most luxuriously strokable fur. Seven bounded along in the wheel in a barely coordinated way that never failed to raise a smile, but she never seemed to see the point of jumping (or possibly she never saw the destination — being ruby-eyed her vision wasn’t that good). She grew old gracefully and died in her sleep at home. 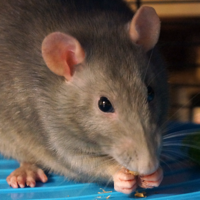 Named, with her sister, after Seven of Nine from Star Trek: Voyager.

Nine was a black-eyed, blue, mis-marked Irish (with a small lop-sided white triangle on her chest), top-eared rat. As alpha, Nine ruled the cage quietly, though she always had her manic moments when dashing around was the thing that had to be done right there and then. Nine loved to run in the wheel when she was younger and ran smoothly and elegantly. She was a good jumper; it was in equal parts frustrating and amusing to see her turn into a puddle of rat before springing vertically up to the top of the corral and balancing on the top edge, which was in itself terrifying because she was a bit clumsy — always the most likely to slip while walking along your arm, leaving a nice set of scratches behind. She took her slow-growing, but ultimately very large, lump as an excuse to chill out and be pampered. We eventually let her go after she started having increasingly worsening respiratory attacks. 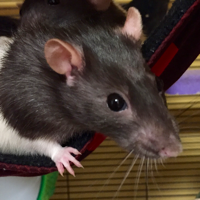 Midge came to us after her last remaining cage mate died and her owner had no immediate plans to get more rats. She was a two-year-old, top-eared chocolate hooded ratty with a very friendly and perky personality; a lively explorer who seemed to have a built-in proximity sensor that meant she would wake up any time anyone came within two feet of the cage. Unfortunately, although introductions seemed to go well at first, there was some fighting and blood drawn and she went back to her owner, who seemed very happy to have her back and was quickly planning to get some younger friends for her.